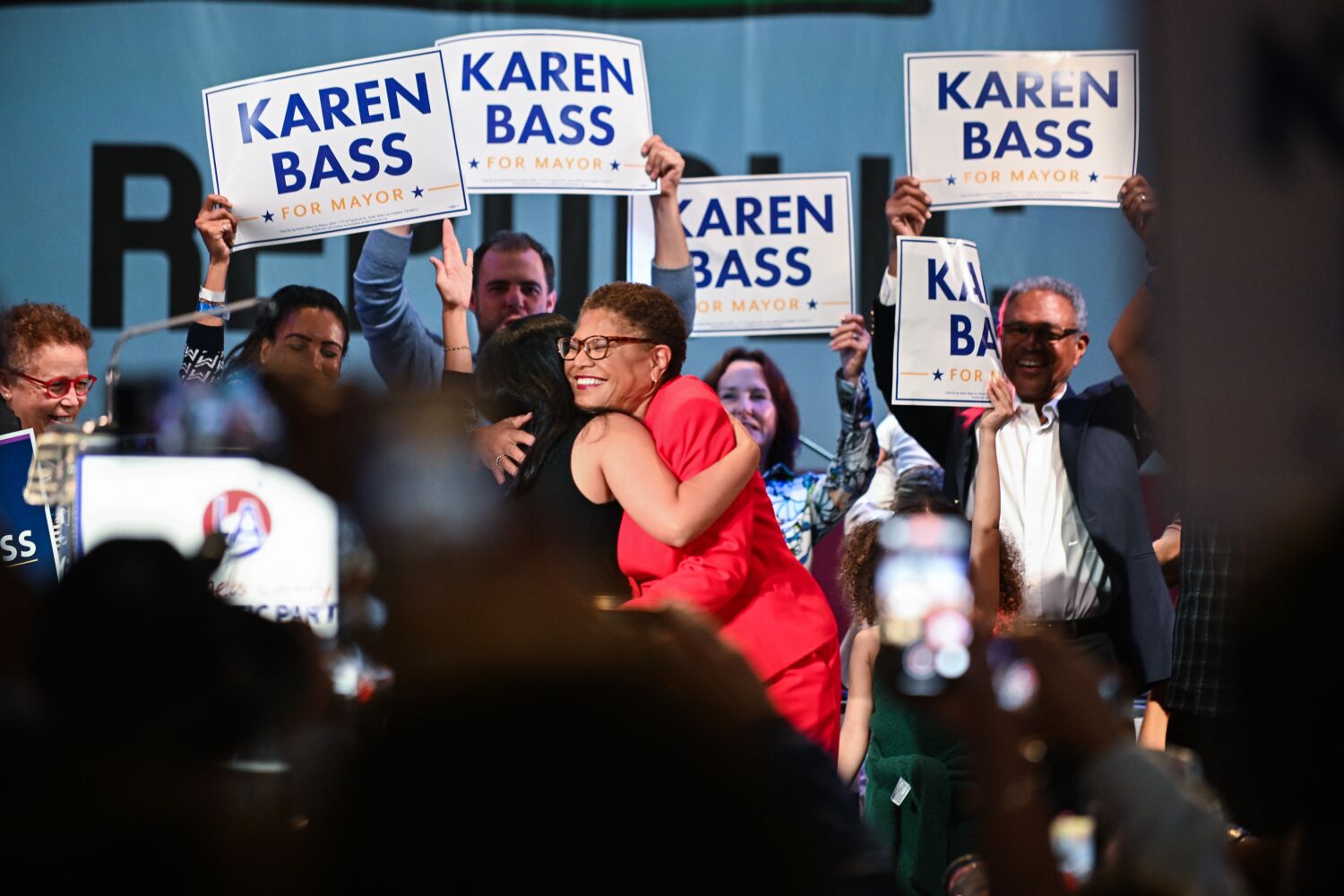 Mayor-elect Karen Bass will hold a public inauguration on Dec. 11 outside Los Angeles City Hall, one day before she officially takes office as the first woman elected to serve in the city’s top job, her campaign said Thursday.

Bass’ midday ceremony will take place on the Spring Street steps of City Hall facing Grand Park and will include musical and cultural performances. Bass spokesperson Zach Seidl declined to provide specifics about those performances. Bass will also speak about her plans for the city during the Sunday ceremony.

The event is ceremonial; Bass’ official swearing-in will take place before the city clerk in a non-public setting.

The broad strokes of the event appear similar to Mayor Eric Garcetti’s relatively low-key 2013 inauguration. Garcetti’s ceremony, also held on a Sunday, was emceed by late-night host Jimmy Kimmel and took place on the Spring Street steps, followed by a free public party in Grand Park.

The outgoing mayor’s oath of office was administered by Kenia Castillo, a 13-year-old constituent who met Garcetti when her mother, a janitor, was striking for better wages. (Castillo, who is now a college student, led the Pledge of Allegiance at Garcetti’s final State of the City address in April.)

The Bass campaign said in a statement that “holding the ceremony on a Sunday will make it easier for Angelenos to attend this historic event and will ensure the mayor-elect can dedicate her first day as mayor to bringing unhoused Angelenos inside and making our city safer and more livable for all.”

The Bass inauguration will be paid for with private funds raised by the campaign, Seidl said. That money will be administered through the Mayor’s Fund for Los Angeles — a nonprofit started by Garcetti that pays for civic programs and raises money from corporations, foundations and individuals. No preexisting Mayor’s Fund dollars will be used for the event, Seidl said.

“The Mayor’s Fund is proud to serve as fiscal sponsor for the inauguration, which will bring the Los Angeles community together to mark the beginning of Mayor-elect Bass’ historic term.” said Deidre Lind, president and chief executive of the nonprofit.

Members of the public are invited to the inauguration, though space is limited and attendees must fill out a digital RSVP form.